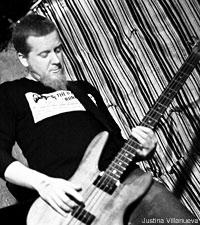 Even though Hallux have played with some pretty rad bands (Withered, Unearthly Trance, Malkuth, Wizardry, etc.), if you live outside of New York area, it is unlikely that you have heard of them. As New York residents, they often play the small stages that Noisecreep likes to frequent. So we are familiar with their brand of heavy doom.

"Well, Andrew [Barker], Hans [Chew] and I are from Atlanta originally, but I didn't really know them then. I knew of [Barker] from his jazz drumming in Gold Sparkle Band and saw him open for John Zorn in 1994, but we never hung out," bassist Jason LaFarge told Noisecreep.

"A couple of years ago, I played a show at Union Pool with Blue Prostitutes that [Barker] had booked. We got to talking and reminiscing of the Atlanta days, and after the show he got in touch and told me he had always wanted to play guitar in a metal band and had been writing some tunes," he added.

Barker -- who had befriended drummer Hans Chew in Atlanta -- set up a rehearsal for the potential members to play the material he wrote. It wasn't until after a couple more meetings that vocalist Jake Klotz -- who was Chew's friend from Chicago -- joined in.

Now Hallux are working on their debut release. "[An album] has been in the works for over a year, but there is light at the end of the tunnel! We're planning a vinyl self-release in the next few months. We're finalizing dates right now. Seldon Hunt will be providing artwork for the record, so we're psyched on many levels," LaFarge said.

You can catch them at the NY Eye and Ear Festival. It happens at the Knitting Factory May 22 and May 23. Hallux play the second day with fellow New York doomsters Naam.