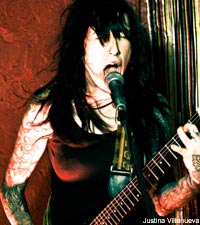 This year At A Loss Records gave us 'Spirited Migration.' Last Monday, the Precious Metal showcase gave us the live experience, when Dark Castle headlined a bill that included Malkuth, the Body and Orphan. The band played two New York City-area shows (the second was a week later at The Charleston). Trust Noisecreep when we say: nobody complained.

As a two--piece doom group, Dark Castle visually reminded me of Jucifer. But, that was only while they set up their gigantic stacks. Ex-Into the Moat guitarist and current Dark Castle drummer Rob Shaffer had a drum kit that took up a quarter of the stage. Even though Lit lounge is a small place, I could have easily written this review from inside his kick drum (it was that big).

In a December 2008 Deciblog post, C.T. of Rwake -- who is working on a documentary about metal from the south titled 'Slow Southern Steel' -- wrote about the band, "The heavy melodies that Robby and Stevie got [on their demo] are the s---. I hear so much more every time I listen to their music (which is a lot), and I only have their demo."

And, their fist-squeezing melodies are just what make the duo so damned interesting. Not to mention the Floridians show a lot of Rwake-type, genre-bending influence on 'Spirited Migration.'

If you live in the Midwest or the South, you can catch Dark Castle and their blinding light show sometime between now and December. They really enjoy being on the road.