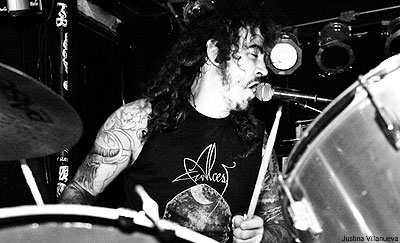 Dark Castle's 2009 release, 'Spirited Migration,' got the attention of metal writers all over the blogosphere -- and in glossy pages, too. On July 9, Noisecreep got a slight taste of what the band's next effort will be like when they played one new yet-to-be-titled track at New York City's The Studio (at Webster Hall). It was killer and immediately got the whole place into their groove.

On the road for the Summer Southern Burn Tour, they were joined by Black Tusk and Zoroaster. Brooklyn's Hull opened the show. A showcase for some of the most potent doom available in the States, the concert was put on by 1,000 Knives and BrooklynVegan.

Slow, sweetened melodic riffs and meaty beats took over the room after guitarist Stevie Floyd asked to dim the lights in lieu of the band's simple, yet killer light setup. Floyd didn't say anything else until thanking the crowd at the end of the band's set. She didn't need to: Dark Castle hypnotized New Yorkers. When the guitarist took swigs of her drink in between songs, friends and fans joined her. It was a metal family night. For a bit of their last song, Attake frontwoman and Black Tusk roadie Chloe Puke got on stage and added her signature growls.

Be sure to check out 'Spirited Migration' on At a Loss Records. And if you're into reading tour diaries, Noisecreep contributor Kim Kelly is writing about the whole trip, and so is Zoroaster drummer Dan Scanlan.