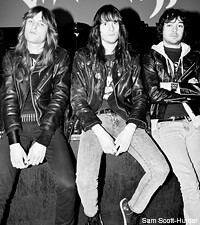 "A rite heavy tit perv is the right to perv hard on a heavy tit," bassist/vocalist Jason Decay tells Noisecreep. "It's a right granted to us metal-lifers." Take that as you will, but Toronto's Cauldron seem poised to be living the metal high-life. They have a standout track on Earache's recently released 'Heavy Metal Killers' compilation, American and European tours fast approaching, and their thoroughly enjoyable full-length debut, 'Chained to the Nite' (also on Earache), is due in May.

Deemed by Metal Hammer magazine as "destined to be the coolest band on the planet," the expectations are high, but Jason isn't feeling any pressure. "It's nice to see that most people are saying good things about us and the record," he says. "But there's also the odd person that is trying to cut us down already. Either way, no pressure, because whatever people say, good or bad, doesn't make us any better or worse, it doesn't change who we are and it doesn't change how the record sounds."

'Chained to the Nite' is chock-full of infectious melodies and thrash-tastic riffs. It's a fresh take on old-school metal that will surely cause even the most jaded of metal fans to dust off their leather jackets and throw the horns in the air with pride once again. Earache is billing them as part of the "New Wave of Traditional Heavy Metal," as 'Chained' is noticeably absent of the growled vocals and super-slick, pro-tooled production that has become the norm in most of today's metal.

Perhaps the pressure is not on Cauldron, but on the nu-metal bands whose days may be numbered, given the backlash that seems to be brewing. "My backlash for that shit started when Korn started ruining the "Power 30" (Much Music's metal video show) back when I was 14," says Jason, "And it ended when I simply stopped caring about hating it anymore. I forget when that was. Like anything, it comes and goes and it will be back again someday to ruin something else, just like bands like us are currently ruining it (for nu-metal)."