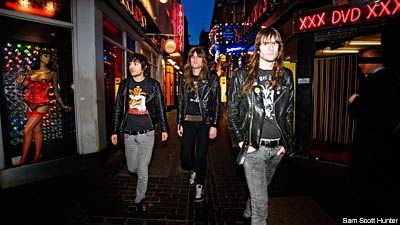 Jason Decay, singer/bassist for the Toronto-based heavy metal band Cauldron, is pleasantly surprised at how well his act's tour is going with Municipal Waste. "It's quite a diverse and extreme lineup," Decay told Noisecreep in Tempe, Ariz. "I just wasn't sure how we were going to go over on a diverse bill, but it's been going over really well so far. There's lots of people coming down early, which is good too."

To compete with the other bands on the bill, Decay said Cauldron are playing more of their aggressive material from their full-length debut 'Chained to the Nite' on the tour. "We're not playing all of our ballads."

The acceptance by heavy metal fans on tour means that the tide is turning for Cauldron, Decay said. But Cauldron still aren't getting the respect he feels they deserve. "It still seems that not a lot of people give a shit here in the States but, but [I'm] really surprised with the press in Europe, especially England, where we've done really well there so far," Decay said. "I don't think we've been in any U.S. metal magazines. I have yet to see any press on us.

"I just think we're not that acceptable here in the States maybe. Whatever. It'll come around or it won't. At least we're doing well somewhere. Things are picking up here, you know. I think especially with this tour, we're getting a little more exposure than our last U.S. tour."

On their last jaunt, Cauldron toured with Sweden's Enforcer. Decay said it didn't fare so well. "It was a co-headlining [tour] and not a lot of people here ... I guess we're not big enough to be touring on our own here in the States," Decay said. "Some of the shows here went really well. The West Coast was a cash crop. The Midwest was s---. The Detroit show didn't go over too well. Chicago, on the other hand, was amazing. The last time we came through Arizona [in summer 2009], we didn't even get out of the van."

The night of the interview, at the Clubhouse in Tempe, Ariz., the fans went rabid for Cauldron, proving Decay wrong. When Decay isn't performing on stage, he's writing new material for a forthcoming album with bandmates guitarist Ian Killpatrick and new drummer Chris Stephenson. The songwriting process is going well, he reported.

"We haven't really rehearsed it with our new drummer yet," Decay said about the new songs. "We just keep going through drummers. We pretty much have been on tour since our new drummer joined the band. He also lives in Ottawa, which has made it difficult to work on new stuff. But we have seven or eight loose tracks.

"I think it's pretty much just more of the same. But it's sort of hard to tell at this point. The songs will be chopped up and put back together a few times. Then Ian would totally have a different opinion on that. It's hard to say at this point, the direction. I just hope we can improve our performance on the next album. Take a bit more time recording it."