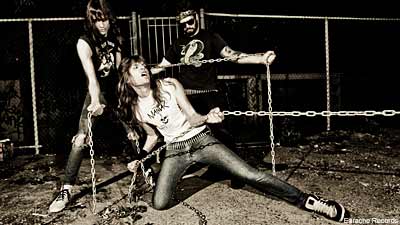 Canadian trio Cauldron have been under the radar in America, but are set to blow with their recent round of touring and debut album, out on Earache. While many bands are reviving the '80s flare for classic thrash, Cauldron are going back to a time when the New Wave of British Heavy Metal reigned supreme. "Of course, I like good guitar solos and guitar playing," said guitarist Ian Chains, in a recent interview, "but I also don't want to listen to something overly technical and boring."

Chains also talked about the first time Cauldron played Europe, and what sort of equipment he's been working with. The album cover for 'Chained to the Night' is an image that is both provocative and nostalgic, and Chains talks about the process their original idea went through to become the finished product. Though the Darkness was very tongue-in-cheek, Cauldron are less ironic and more classic.

You can judge for yourself, since they have a healthy number of tour dates up ahead, which includes America in November and December.