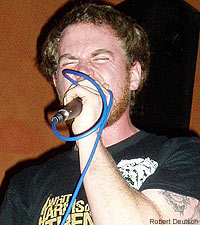 Sure, it's a day and age where people steal music and record labels keep losing money. But bands still exist -- somehow. It's the emotion, the art, the right ... right? After all it's not about the detriments, but more the perpetuating of metal's power, right? In the Binary Code's case, it's the logical approach to team up with MetalSucks to do a digital release. And hit the road, of course.

"We had material recorded," vocalist Mike Apprich told Noisecreep about the idea to release 'Suspension of Disbelief,' the band's debut. "Right now it seemed like the right thing to do. We couldn't press the record; it's not financially in the books right now."

Rather than let that go against the guys in the band, the Binary Code heard from MetalSucks -- a bastion for blasting of everything sucky about metal, current home for all things cool about the genre and, ultimately, helpers out.

"MetalSucks ... they love what we do," Apprich continued to Noisecreep. "They've really supported us along the way, and they offered to us to do the release of the digital recording. From there ... the Hypno5e camp was putting together a tour, and our manager, Ben, pitched us for it and got us on the tour."

That would be the Metal as Art Tour, continuing across the country for a few more days before the East Coast band returns home. The current release, 'Suspension of Disbelief,' is available now, and the band told Noisecreep that there will be some East Coast shows in the early part of 2010 while the band somehow juggles this and readies its next release.