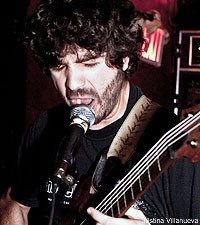 And everyone was vocal about it, but the boys in East of the Wall had to respect the venue's curfew. It was Lit Lounge's eighth anniversary. To prove so, the place was covered in balloons. Soon after the band's set, the club would be even more drenched in celebrities and girls in stilt-lettos.

One song -- or eight minutes into their set -- bassist Brett Bamberger (also touring bassist for the Binary Code) moved toward a mic on a stand and muttered a couple sentences. With guitars feeding back and his hair in the way, I could barely understand what he was saying. But I think it was something along the lines of "... rocking the f--- out!"

East of the Wall's vibrant melodies layer in the same vein as Rosetta. They have the odd rhythms of Keelhaul and Dysrhythmia with the poppiness of the Fall of Troy and the fury Coliseum. Really what I'm saying is that you should go buy this damned split, because it's good. And you should buy it directly from the band while they're on tour with Goes Cube.

Oh, and to less some confusion, members of the band formerly known as Biclops now make up East of the Wall. New Yorkers can catch the band again on March 5 with Goes Cube, Austerity Program and Gwynbleidd at Union Pool. The rest of the country can catch them on tour with Goes Cube until March 30.