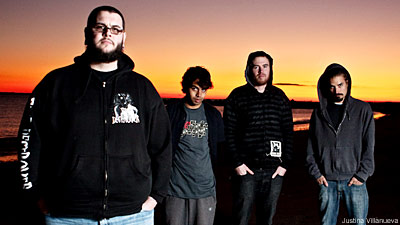 The Binary Code make an intricate brand of death metal. Drummer Umar Fahim and guitarist Jesse Zuretti have a lot of skill. Watching the two live, it's easy to get sucked in. Rows of people either headbang or study the musician's movements with their jaws dropped. The band's work ethic and eagerness to learn new music is just as compelling, too.

When the band sets a goal, they follow it. During spring break, drummer Fahim intended to rehearse every day to be prepared for a recording session by the following weekend. Zuretti says he achieved that goal.

"[Fahim] ended up sleeping there every night. He had a sleeping bag, and he used my pea-coat stuffed in his sleeping bags pouch for a pillow," Zuretti told Noisecreep. For eight or more hours a day, Fahim played drums along to a pre-recorded guitar track. He played incessantly.

"Umar impresses me to this day. I'm his biggest fan. We're like brothers, so when we compliment one another, it generally hits us a bit harder than anyone else. It's kind of like having a dad that's really hard on you, and finally getting a compliment out of him. It makes your day," Zuretti said.

When it came to the recording session, the band always ended up keeping Fahim's first take, even though he did 10 or more for each song.

"The guy is so humble, too. He has no idea how berserk he is," Zuretti said. Fahim has studied with Chris Pennie (Coheed and Cambria, ex-Dillinger Escape Plan), Jay Dittamo (Frank Zappa) and Karl Latham -- whom Zuretti labels "a cool local drummer."

"A lot of our abilities come from inspiration, more than any theoretical studying we've done. I'm self-taught on guitar, but I've schooled & studied theory for several years of my playing history (roughly eight years, four of those years I studied music in high school and college combined)," Zuretti said.

"I don't think about anything other than what I'm hearing when I play to write. Most of my 'training' would be constantly delving into music and finding new bands, and just finding inspiration in the music," he adds. The inspiration he found led to even more heavy groove in the band's most recent tracks 'Ocean of Light,' 'Priest' and 'Encircled.' Some of those songs reference Zuretti's obsession with Gojira's 'From Mars to Sirius.' The guitarist has the whale and two planets from the album cover tattooed on his right arm.

"Probably one of the biggest shockers to a lot of people would be the inspiration I owe homage to -- which is [Mudvayne's 'L.D. 50']. That was one of my first obsessions, musically." Zuretti claims to know every lyric and every riff on the album. Along with a slew of metal bands, both of bassist Brett Bamberger's bands (East of the Wall and the Postman Syndrome) and Steely Dan, Zuretti is really digging on a new Slipknot song called 'Butchers Hook.'

The Binary Code self-released their last EP with some help from MetalSucks. They sold it in a bundle: a set of MP3s with a t-shirt. This time around, they are not so sure how they want to go about it. The 3-song EP called 'Priest' should (and hopefully) be available soon.