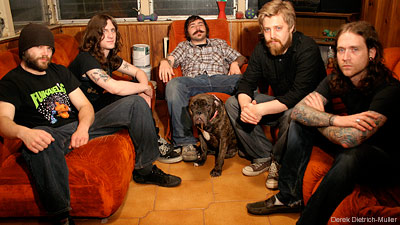 Sludge metal is a strange hybrid of doom metal and hardcore punk that is lauded for its harmony in putting two very different corners of music together. The Atlas Moth also bring synths into the equation, giving their sound a classic '70s touch. Guitarist/vocalist Steve recently talked about their latest album and how it relates to the relative definition of success in the music business.

"The more you get into the music industry," he says. "You grow up thinking that what you do is that you f---ing play some shows, and some a--hole is there that is going to f---ing sign you to a giant recording contract, and you're going to be Metallica. That's a load of horse s---." Their new album title, 'A Glorified Piece of Blue Sky,' is exactly that -- questioning the end goals of the actions one takes in life. Steve added that there are multiple other themes in the album, including references to shamanism and Sumerian culture.

Based in Chicago, the band members are not particularly big fans of newer metal (their drummer listens to funk and old jazz), and their varied tastes influence a great amount of their sound. Recently signed to Candlelight, the band has also gained attention for using three guitarist in its instrumentation.