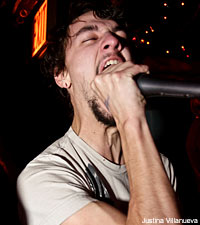 "We're Argentinum Astrum. We're playing with one fifth less members than we normally do," disappointed frontman Andrew Morrill told folks at the Lit Lounge on Jan. 4. It was the first Precious Metal Monday show of 2010. You know, the one that is hosted by Curran Reynolds (metal show curator and Wetnurse drummer) every week. Beauty Apes, Manvswild and the Fight Within also played.

Surprisingly, there were actually people at the show besides those who were not in bands -- and besides girlfriends of band members, of course. That's not so likely considering how freezing cold it was in New York City that night. Still, this made it an even more frustrating event for Argentinum Astrum -- whose second guitarist couldn't make it to the stage, despite being physically present at the show.

"Our second guitar player is passed out over there on those benches. So if you want to take a s--- on him, that would be perfect," Morril later said.

The doomy black metallers are from Knoxville, Tenn., so it's not very often that they make it to New York City. While I could sympathize for their situation, I think their anger added more to the set -- which went from a slow, goosebump-inducing evil to pacemaker bursting fast. Even though Argentinum Astrum's songs are long, their set was still pretty short. Trust me, we all wanted more. And even though they couldn't play the last song of their set because their second guitarist was so wasted, I was more happy that they actually played.