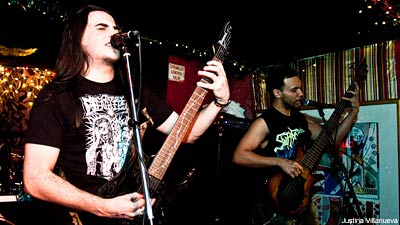 Edifice, also from the opposite side of the Hudson River, invaded the ear drums of all Lit Lounge patrons with brutal, Suffo-Fetus death metal. Featuring three members of the band Morbid Terror, Edifice were tight and mosh-inviting. 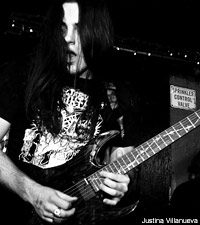 "If this place wasn't so small I'd say now is the time to f---ing circle pit!" Edifice guitarist Buddy Hjelm told the crowd.

In between Edifice and Flourishing was an ultra-long break as Flourishing drummer Brian Corcoran set up an extravagant drum rig. When the grinders finally took the stage, I was ready for guitarist/vocalist Garett Bussanick's -- who also picks for Wetnurse -- eye-popping expressions. Just like when I saw the band play their very first show at Lit two months ago, Flourishing provided songs wealthy in groovy riffs and walloping bass lines.

While Flourishing's debut EP is set to release in 2010, Edifice's EP 'By Night and Negligence' is available for free download.