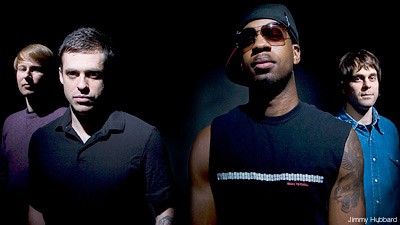 Metal has been a lifelong journey for Wet Nurse drummer Curran Reynolds, who also did time as publicist for Earache before branching out to become an independent PR maven! He organizes the New York City-based, Monday night show series called Precious Metal -- and of course, pounds the skins. He wears many hats, and was happy to dig deep into his memories and history to share his inspiration.

"When I was 10, I organized my middle school talent show and also entered the show as a contestant. I played a drum solo, and the judges I'd hired awarded me last place," Reynolds told Noisecreep. Despite coming in last for an event he spearheaded, Reynolds was undeterred. "22 years later, I'm still playing multiple roles. I'm a drummer in a band, a publicist and promoter of live shows. I can remember being equally excited about both sides of that middle school talent show.

"The behind-the-scenes stuff was exciting to me because it was the thrill of making something out of nothing, creating this event and getting people to come. My older sister and I were doing this sort of thing since we were really young. We'd put on various weird performances around the house and get our parents and neighbors to come watch, like lip-synching to Michael Jackson's 'Thriller' album. The thrill was in planning the show and getting people to come see it, as much as the actual performing."

Reynolds' flair for performing went beyond the typical dress up, though. "We did things that blurred the line between fantasy and reality. From four to six, I would wake take on a different profession or identity for the entire day. Doctor, pirate, Roman, astronaut, gas station attendant were some of them. But I would take it pretty far. When I was a doctor, I would put signs on our car saying it was an ambulance and signs on our front door saying it was a hospital.

"When I was seven, inspired by all the 'no nukes' propaganda, I dreamt up this group called the United Peace Organization that was going to fight for nuclear disarmament. I put signs with my phone number up around our neighborhood in Portland, Maine to get people to join. We'd get calls from people thinking it was a legitimate activist group. There was something so exciting to me about crossing that line into the real world, beyond the barriers of home and school." Reynolds was DIY before he even knew what the 'DIY' concept was, due to "the satisfaction of doing stuff yourself." When he hit double digits in age, he became obsessed with rock music and that's how he got where he is today: multi-tasking, playing, planning.

"By 14, I was playing drums in two bands, playing shows around Maine," Reynolds recalled. By 16, he was booking and setting up shows. Today, Reynolds is 32 and reps acts on Black Market Activities, and has launched campaigns for extreme yet brain-scarring acts like Today Is the Day, Trap Them, Landmine Marathon and Tombs. He books U.S. tours for Wet Nurse and his friends' bands, so aspiring music industry types should be inspired by Reynolds' ability to do it all.

Wet Nurse have a spate of tour dates beginning in November, as well.