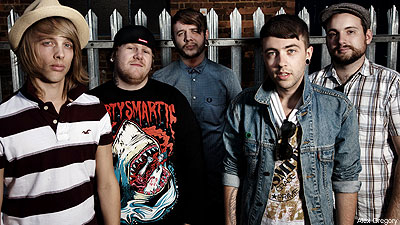 Anyone who's ever been to Canada will tell you the people who live there are extremely laid back and affable. The police in Canada? Not so much. This is the lesson learned by British hardcore outfit Your Demise, who had an interesting experience with the law during a recent trip through the Great White North.

According to guitarist Stuart Paice, Your Demise were less than ten miles from the Canadian border, fresh from a stop at Tim Horton's (Canada's answer to Starbucks) where they'd loaded up on coffee and bagels, when three police cruisers pulled up behind them, sirens blaring. "We pulled over, completely baffled as to why we where being stopped, as we had done nothing wrong," Paice explains.

After pulling over, one of the cops shouted for the driver to exit the vehicle. The band's driver, Danny, did as he was told. He put his hands up in the air, and walked backwards towards the officers, who had their guns drawn.

"We then witnessed the officer put a gun into Danny's back and drag him towards the police cruiser," says Paice. "Before we knew it, Danny was handcuffed and in the back of the squad car. Needless to say, we now had some mental stuff going through our heads. Next, they shouted for the passenger," the band's tour manager, "to get out. Same thing: Gun, handcuffs, car [hood]!"

The band, Paice says, started giggling nervously and then heard, "All of you! Get out!" The band members did, "and we were told to put our hands in the air and get down on our knees (in the snow, mind you). All the while, we [were] held a gunpoint. So we get out in the freezing snow, on the ground and the cop starts to search the van. I mean, it was like '24' Jack Bauer s---."

It quickly dawned on the band that they were caught up in something bad and that the police had the wrong people. "The police were responding to a call in which a shooting had just occurred on the very road we were traveling on," Paice says. "We were the first car that the police saw after receiving the call, so naturally, they pulled us over. This was a classic case of 'wrong place, at the wrong time.' Let's just hope that the person got caught and the victim was in good health."

The band was eventually released after their brief detainment. Last night, Noisecreep spoke with Paice, and he recalled the situation. "When it all happened, it was more a taste of, 'What did we do?' We were scared to the point of britchin' it," he explains. "They handcuffed us and the whole bit. Now, we've been handcuffed before, but never for or anything like this. Plus, they knelt us in the snow after we had started to undress because we were getting' ready to sleep so needless to say, it was ridiculously cold and eerie."

Download Your Demise Songs
Filed Under: Your Demise, YourDemise
Categories: Interviews, News
Comments
Leave A Comment
Back To Top