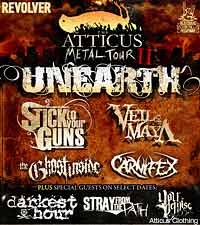 Music fan-approved apparel label Atticus will sponsor another full bore metal tour, the Atticus Metal Tour II, featuring Unearth, Stick to Your Guns, Veil of Maya, Ghost Inside and Carnifex, with special guests Darkest Hour, Stray From the Path and Your Demise, as well. Atticus marketing and PR rep Mark Bubb, who is one of the driving forces behind the tour, told Noisecreep that the selection process for the bands is a simple one.

"We keep it to those who've worked with Atticus to begin with, although it's not a pre-requisite," Bubb told Noisecreep. "We like tours that are youth-relevant, where kids will be excited. We stay away from fads and trends in our clothing. We never put anything with neon. We've skipped that entire fad. We only did one shirt with gold foil! We are staying classic. We are at the core a clothing company, but it's rooted in music."

Sounds like Atticus' tours are like the music. The brand gets fully behind the tours it elects to sponsor, right down to who it co-sponsors with. Atticus is as hands on as it gets. "Most brands may have limited involvement, such as contributing a large sum of marketing money, putting their name on it and saying 'Presented by,'" Bubb also said. "But with every aspect of what goes on with our tours, I am either driving or co-piloting.

"I book the ads, set up online promotion, am involved in the routing, the venues, the interviews. It's good to know what's going on. We're not as big as some of the other 'title' tours, but this is us putting our name on something. We also have subsidiary sponsors. People think it's weird to be branded with other sponsors. But it's always people we want to work with, and it makes sense, like with Revolver magazine. For us, it is important to team up with the right companies and right bands."

Bubb says they pick the bands by hand for each tour -- metal or not. Atticus is excited about the upcoming tour, which kicks off in March, for a variety of reasons. "Most of the bands on this tour are young guns who are doing well. Unearth are really stepping up, asking us, 'What can we do? What can we film? How can we blow this up?' That excitedness about doing the tour means the most to us. It's a friendship-driven relationship with Atticus," Bubb added.

While Bubb himself won't be picking up change in the mosh pit, he is looking forward to spectating said pits. "It's my favorite part to watch the progression of moshing and dancing in the pit," he said. "But Unearth are headlining, so it's going to be a party. If you get bored watching [guitarist] Ken Susi take beer bongs on stage, there is something wrong with you."

The tour begins March 5 in San Diego and runs through April 4 in Worcester, Mass.