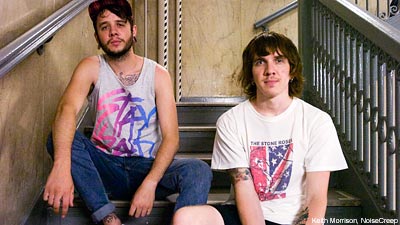 Ever say to a Welsh person, "Oh, I love English accents"? If you have, you can expect them to recoil in horror, since Wales (and being Welsh) is quite different than England (and being English). However, both the English and the Welsh are part of the United Kingdom and Great Britain. Your Demise – vocalist George Noble, who left the band earlier this month and has been replaced by Ed McCrae, and bassist Jimmy Sampson – dissected the differences, in their very English accents and with incredibly cheeky and decidedly British humor, of course.

"If we were Welsh, you wouldn't be able understand us," Sampson told Noisecreep, while visiting our offices, with a wink. "I can't understand them. It's a massive difference. The Welsh are British, so there is not a difference there. Being British includes Great Britain, Wales, England, Scotland, Northern Ireland. British is Great Britain and English is England. The accents are completely different things."

After explaining the geography, Sampson went on to joke about one of his crazy Welsh comrades. "One of our friends is Welsh and he sprayed his face with hairspray – or was it lighter fluid? – and then set his face on fire," he said. Set his face on fire?!? "He is a boots and braces skinhead, with no hair," Sampson said, somewhat rationalizing an utterly irrational fiery deed. "He covered his head with the lighter fluid, lit it on fire and then couldn't put it out. Next time I saw him, his whole face was a scab. He is nuts. His name is Dyas is his name, and he is Welsh!"

Your Demise's 'Ignorance Never Dies' is out next month.

Your Demise Tour Dates
on TourTracker.com

Filed Under: Your Demise, YourDemise
Categories: News
Comments
Leave A Comment
Back To Top