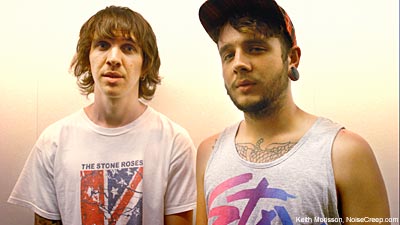 Your Demise freely admit that they are a hardcore band, which is often a slippery categorization in the aggressive music scene, since 'hardcore' tends to means a specific sound and style to a particular set of ears. More often than not, though, the genre is about an ethos, a culture and a way of life – which allows the music to exist regardless of strict genre distinctions.

"When people try and label our band, they say that we can't be labeled since we don't sound like one exact band," bassist Jimmy Sampson told Noisecreep while visiting NYC, a long way from his native England, to meet with the U.S.-based personnel of their label, Earache. "People always say we sound like five other bands."

There are worse things critics could say about a band, so Your Demise aren't upset by such a comment. Sampson and his mates are happy to be associated with the hardcore scene. Sampson sports a plethora of HxCx-related ink, with a Cro-Mags 'Hard Times' tattoo, as well as Trapped Under Ice and Comeback Kid tattoo. He's also etched with Biohazard's 'Down For Life' slogan and has a vegan, straight edge piece on his chest. The latter is a tattoo that represents a sector of hardcore that has been dormant for much of this decade. But Your Demise aren't interested in today's trends.

Former vocalist George Noble weighed in – albeit before he left the band, giving the ever-elusive 'personal reasons' excuse – about the hardcore scene's pride. He may be the former singer of the band, but his perspective, at the time, seemed shared by the members. "We're trying to rebirth to what guided us," he said. "The point of hardcore is to be message-driven. It's not all about 'everything is fine and wonderful, keep doing what you do and it's great.' There is no point in that. That's for Britney Spears or Madonna. To each their own, but for me, it's monotonous."

Your Demise Tour Dates
on TourTracker.com