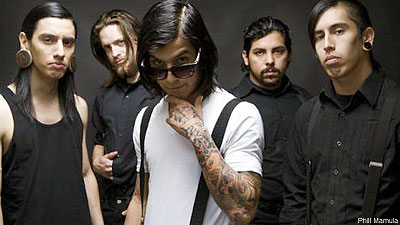 Texas natives Upon a Burning Body aren't part of the underground metal scene anymore. The band just released its debut, 'The World Is Ours,' and is currently on tour with Carnifex, Suffokate and Your Demise.

No strangers to the road, the members of Upon a Burning Body have been playing gigs and honing their sound for years. So when it came time to shoot a video for the single 'Carlito's Way,' the quintet was pumped. Turns out, it wasn't all rock 'n' roll fun.


"The video wore us out 100 percent," singer Danny Leal told Noisecreep. "I actually put so much energy into performing the song 15 times that I got sick for like three days after the video. It was awesome!"

All the songs on 'The World Is Ours' follow a mafia-type theme. In fact, the band's lyrics portray the characters actor Al Pacino played in many films like 'The Godfather' and 'Donnie Brasco.'

'The World Is Ours' is available now via Sumerian Records.