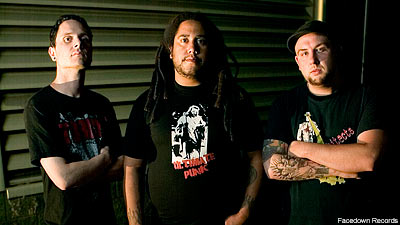 Don't you ever ask a dude from a Christian metal band if he's ever signed or been asked to sign a woman's supple breasts before. That was my blunder last week when I got Darrell Tauro on the phone. He's in Connecticut hardcore outfit Wrench In the Works and grew up in the Hartford area. The band is Christian, but you listen to them and you forget it because they don't sound Christian. They sound like other bands from New England who were raised on Overcast and Converge. And according to Tauro, Wrench gets that a lot.

"People never think we're a Christian band, and its not that we don't share our faith with people, I just think people don't generally pick up on it," he says. "Hopefully, they'll pick up on it more on this record. In a positive way."

When I asked him about signing boobs, it was a brain fart on my part. He laughed at first. It was the same laugh people hear from me when they've said something stupid. He told me, in a very serious tone, that Wrench are "not that kind of band." Still, I continued. "Well, have you ever been asked to sign boobs? I thought that was something that happens to bands." I was joking, of course, but this time, there was no laugh. It wasn't until he started talking about the band's forthcoming record, 'Decrease/Increase,' which drops on March 16, that I remembered: He's Christian.

"It's inspired by parts of the Gospel," Tauro says of the record, which they finished tracking last month. Shai Halud's Greg Thomas helmed the entire LP, which drops this spring. "The coming of Christ and him being crucified and stuff like that. The concept is basically just decreasing yourself so that God can increase in your life. In a nutshell."

There are 11 songs on the disc, and fans of the band's other albums are going to be rather amazed at what they hear. According to Tauro, for 'Decrease/Increase,' the band went from a three-piece to a five-piece and that the injection of new blood helped make the their sound "tighter and just more intense." Also, the guys are playing with baritone guitars on this next record, which he claims gives the band a more "intimidating sound." One song, though, stands out for Tauro. It's called 'Project AK-47,' named after the rescue organization for child soldiers and children in armed conflict in Southeast Asia.

"They're going out there and freeing child soldiers and rescuing these kids," he says. "Some of them are 8, 9 years old, and they're being trained and used, basically, for drug armies or even governments use them. This organization goes in and rescues these kids and houses them and educates them. They give them a chance to live their lives and not be victimized by these regimes."

Wrench in the Works will be touring around the release of the record, with plans being ironed out for a road trip in March. Let's just hope Wrench doesn't go out with In Times of Trouble, or else they won't be able to get through their set.

"The first time we played with them, we'd had never met them before. And it's funny, because after you do something like that, you have a good laugh about it after," says Tauro. He's telling me how the guys in the band, during the show, emerged during Wrench's set, and lifted their shirts to reveal I Love WITW' written across their chests. "We've had a bond with that band ever since. It made us crack up so much, we had to stop playing."