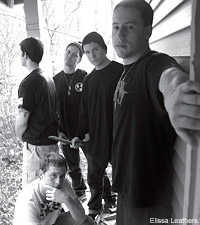 Baltimore's Trapped Under Ice has been making headway in the scene with their abrasive and raw, old-school hardcore. They've garnered enough support to tour Europe, and they will soon be hitting the road with the likes of Madball and Vision of Disorder. Justice from the band took some time out of their busy schedule while "across the pond" to talk to Noisecreep.

You're playing Europe now. Is there a big scene or healthy demand for old school-styled hardcore?

A lot of good things are going on in Europe. A lot of strong hardcore scenes and a lot of people who really appreciate what we do. On the other hand there is a lot of territory that we haven't covered and I'm eager to see what they have to offer. Lots of great bands out here including Born From Pain, Rise and Fall, Cold Snap, and many others.

How has living in Baltimore affected your sound, lyrics, or attitude of Trapped Under Ice?

Being a Baltimore-based band is a big part of Trapped Under Ice. Bands like Stout, Gut Instinct, and Next Step Up are direct influences on our sound. A good portion of our lyrics are about being from a place like Baltimore where you have a lot of poor areas with desperate people who will do anything to get by. It's crazy, and you see it everyday, whether it be the news or a firsthand account. Being a band from Baltimore is great because we have a very supportive scene and we may not have ever continued to pursue the things we have if not for our friends back home. I feel like for a few years, Baltimore went unnoticed. In the the year 2009, this is no longer the case. With bands like Pulling Teeth, Ruiner, Stout, and Mindset, people will know what Baltimore is about.

Your band is named after a Metallica song. Are they big influences of yours?

Although we are big fans of Metallica, we didn't consciously take the name from them. Sam our guitar player came up with the name and it's definite that Metallica is a huge influence on him and his guitar style. So I'm sure on some level he got the name from Metallica without realizing it. 'And Justice for All' is one of the first records I ever owned. If you play heavy music, it's likely that you've been influenced by Metallica.

How did you guys get hooked up with the $10 for 10 Tour this summer? There are a lot of bands that would kill to get on that.

Scott Vogel of Terror looks after our band in a lot of ways. He told us about the tour and maybe a month later I got an e-mail from Tim Borror of the Agency Group asking us to do it. We're definitely lucky to be playing with bands like Madball, Terror, and Vision of Disorder, who are huge influences of ours.

Where did that drawing of the face made of bodies, from your MySpace, come from?

The drawing of the bodies is something made by our friend Zach. He uses similar drawings in a lot of his art. Sam is involved in a lot of graphic design work and when he has free time he makes some images for our band. Sam took the image of the bodies and put them into an image of Zach's face. We originally used it for our demo CD-Rs we would hand out. We've since used it on a lot of things we've done.

Filed Under: 819571, trapped under ice, TrappedUnderIce
Categories: Interviews
Comments
Leave A Comment
Back To Top