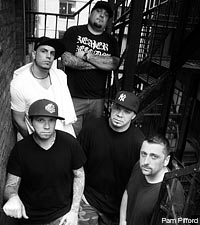 Survival. That's what 'Life & Times' -- the latest from New York hardcore heroes Maximum Penalty and the band's first album in seven years -- is all about. Like the album, which dropped Oct. 5, the video for its title track conveys a similar feel. Here's a band that's been through the proverbial ringer, including a brief prison stint, only to make it out, albeit with grit in their nails -- but stronger, more determined and more focused on turning the brutal meter over into the red.

Like old-school hardcore videos, 'Life & Times' features Maximum Penalty rockin' out in a cramped basement, with loads of closeups of the dudes punishing their instruments and pipes. This footage is interspersed with imagery from the greatest city in the world: New York City. Graffiti, roadside memorials, street signs ... heck, there's even a dude in a Rascal.


"Over the course of Maximum Penalty's 24-year tenure as a band, this is ironically the first time we have shot a video for any song off any of our releases," says bassist Jonathan Buske of the clip, which Noisecreep is proud to be premiering. "Needless to say, we are very excited and proud of what we accomplished visually and aesthetically. This video personifies the lyrics perfectly and most importantly, eternally pays homage to all of our fallen loved ones."

Back in October, Maximum Penalty guitarist Joe Affe told Noisecreep that the new record is about persevering "through the ups and downs of life" and pulling "yourself up by the boot straps and rising above without having to f---ing literally brutalize your way through life."

This January, Maximum Penalty will be hitting the road in support of 'Life & Times' with Trapped Under Ice for a series of East Coast dates. Cruel Hand, Naysayer, Forfeit, Born Low and Death Threat are also on the bill. That tour kicks off in Syracuse, N.Y. on Jan. 1 and runs through Jan. 17 in Baltimore.