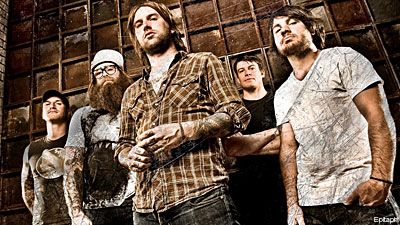 Lock up your daughters. Every Time I Die are heading back out on the road next month. And when ETID hit the road, a party is sure to ensue. "Well, there will for sure be some unexpected songs from older albums, and of course a bunch of new stuff," guitarist Jordan Buckley told Noisecreep, even as the band had just returned from Australia and was suffering from a major case of jet lag. Anyone who's ever seen Every Time I Die knows the band has a reputation for off-the-wall, fun live shows, which sometimes sees them performing in costume -- and always saying hilarious stuff from the stage.

But there will not be any costumes this time, it appears. "Playing in a costume ranks up there on my list of least favorite things, alongside our new drummer's piss jug, auto-tuned vocals, people who won't get off the phone when you are trying to hang up and 'The Jay Leno Show,'" Buckley said sarcastically. "We always think it's a sweet idea, then 10 seconds into the first song, I'm like, 'Man, I wish I could actually play this song ... too bad I'm wearing a huge bed sheet because we thought it would be funny to play as ghosts.' I'm always down for antics, though."

The tour, which supports the band's Epitaph debut, 'New Junk Aesthetic,' kicks off on March 10 in Syracuse, N.Y. and runs through April 6 in Erie, Pa. It is sponsored by ESP Guitars and Vans, with Four Year Strong, Polar Bear Club and Trapped Under Ice in support slots.

Since ETID hail from Buffalo -- a much-maligned football town due in part to the Bills' perennial inability to seal the deal in the Super Bowl four consecutive years -- we had asked Buckley for his predictions for the Super Bowl. He, like most bookies, bettting men and football fans, was wrong! "The Colts will win," Buckley had pronounced. But, of course, the underdog Saints took the crown.

Buckley also had a few choice words for the train wreck that is Terrell Owens, who enjoyed a less than stellar season with the Bills this year. When asked if he considered the wideout a flop, Buckley said, "If the Buffalo Bills wanted TO to catch less passes, score less touchdowns and win less games than he ever has -- then I'd say he was a success!"

Every Time I Die Tour Dates