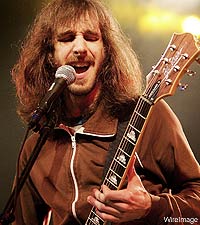 The Sword have debuted 'Tres Brujas,' the single from 'Warp Riders,' their third album, which is set to land in six weeks on Aug. 24. Wow, there's only like seven more weeks of summer?

This writer has checked out the song, and it's a wee bit different than the band's previous outings. It's still got that classic rock with a modern twist riffing, but it's a lot poppier and catchier, with the band taking a bit of a left turn into more melodic territory -- without sounding like it's trying to get on commercial radio and changing for the sake of 'the man.' The song isn't quite as heavy as what I'd expect from this Austin, Texas band, but it delivers the goods.

'Tres Brujas' is also the first chapter in the sci-fi narrative that encompasses the whole of 'Warp Riders.' Yes, there is a plot of space opera meets post-apocalyptic western, which is incredibly vivid and specific, and the band is revealing key pieces of the plot via a three-part video series, which begins with the 'Tres Brujas' video and concludes with clips for 'Lawless Lands' and 'Night City.'

You can pick the track up via iTunes now. Or you can wait for everything to be revealed at once on Aug. 24.