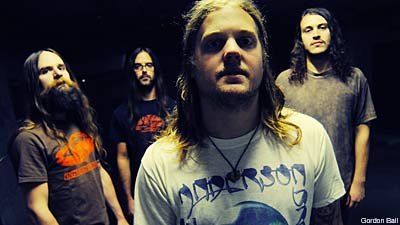 Like Trouble, the Sword, Mastodon and their current tourmates High on Fire, Montreal-based quartet Priestess create dense, chugging music tinted with bluesy psychedelia and powerful enough to knock out a few teeth. The band's latest single, 'Trapped in Space and Time' has just been debuted online.

The song lunges, sways and storms ahead like a dog that's dug up a hornet's nest. Guitars intertwine, then clash in a deadly dance of nuance and nastiness. Drums trample and plunder, and vocals throttle and claw in an equal mix of desperation and despair. Yet the whole procession is glazed with an anesthetic sheen that dulls the pain like a shot of THC-tinged novocaine. And according to vocalist and guitarist Mikey Heppner, he feels this way "every day that you're gone," which must be kind of a drag -- except the anesthetic part -- since he's always on the road.

'Trapped in Space & Time' is the last track on Priestess' second album, 'Prior to the Fire,' which came out Feb. 2. The band recently released a concept video for the song 'Ladykiller,' which was directed by David Valiquette and filmed on location in Montreal. The clip depicts the band rocking out in animal furs on a wilderness background between surreal scenes of a hotel maids, intoxicated party-goers, a girl shooting hoops of a four-door sedan filled with bees, which runs down old ladies with shopping carts and young nubile women with equal ardor.

Priestess remain on tour with High on Fire, Black Cobra and Bison B.C. through May 7 in Eureka, Calif. They will also play the next day as part of The Missing Link with High on Fire, Mastodon, Between the Buried and Me, Baroness and others.