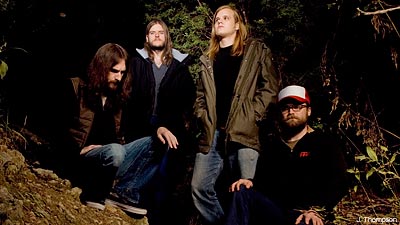 Grandiose heavy metal quartet the Sword are halfway through recording their third album, and, reveals frontman J.D. Cronise, fans can expect a few changes. Speaking to Noisecreep from the band's home base of Austin, Texas, Cronise says that the as-yet-untitled record will have a broader hard rock sound, recalling bands like Guns N' Roses and Thin Lizzy, while keeping some thrashy elements, too.

The aim isn't to broaden the band's appeal outside of the heavy metal market, though. "If more people listen that's great, but we're not doing it for that reason," says Cronise. "We are just more interested in expanding our sound for ourselves. If we wanted to expand our audience we should just remake the second album over again, rather than challenge people with something new."

Cronise adds, "It's really a concept record. The songs revolve around a concept we came up with or spin off from it. It's not the kind of fantasy concept though, it's more sci-fi." For now, he's keeping quiet on precise details.

The Sword just returned from a low-key, mostly local January tour -- local being a 300-mile radius of Austin -- where they tried out several new songs before nailing them in the studio. "You don't know how a song is going to be or whether it works until you try it out in front of an audience and see what kind of impact it has and how it feels playing it live," says the singer and guitarist.

Clearly it felt pretty good, and the Sword are now steaming through the record. Another change is that this time the band is working with a producer. They chose Matt Bayles because of a résumé that not only included new metal greats Mastodon, but also a varied bunch of bands from Isis to Minus the Bear.

"I mostly produced the last album. I like to keep control over what's happening. I know how I want the band to sound. Besides we couldn't find anyone who was as passionate about the band that we wanted to produce the record. Then we found Matt."