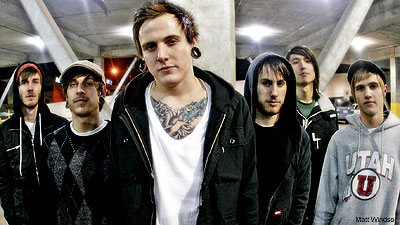 Chelsea Grin are the inaugural artist on Artery Recordings, the new Razor & Tie-distributed imprint label formed by the Artery Foundation management. The AF team represents the Devil Wears Prada and Evergreen Terrace, to name a few. The Chelsea Grin's name is violent. It's the mouth that Heath Ledger's iconic Joker sports and is a form of torture during which two incisions are made at the corner of a victim's mouth. And then as the victim is tortured, he or she screams, causing the incisions to rip and spread, leaving the appearance of a grin. Ouch!

The music on the band's debut, 'Desolation of Eden,' is just as street-fight vicious. "Well, we consider ourselves a deathcore band, but we try to add in some melodic parts here and there to spice things up," guitarist Jaek told Noisecreep. Even if they consider themselves part of the uber-trendy deathcore scene, it's worth noting the band's music leans more toward the grind side.

The Salt Lake City sextet is a rather new band -- the guys are still in their teens -- but they are attracting audiences with every performance. Jaek said, "It's a lot harder than most people would think, being in a new, 'just starting out' band. We just hope that after a long time of paying our dues and hard work, everything will pay off. Right now, we are just enjoying doing what we are doing: traveling around the country, playing music and hanging out with kids that like to listen to what we play. There is definitely a lot more behind-the-scenes work and stuff that has to be done that we didn't really realize before. But it's worth it 100 percent."

The band is so worth it, in fact, that bassist David is enlisted in the military and was supposed to get deployed for the war effort in March but managed not to. "After a bunch of appeals, he got out of it so he could continue playing for us. Our guitar player Michael is a world-renowned 'Counterstrike' player and has been in the top 50 in the world or something along those lines. Other than that, most of us are pretty average teenagers," Jaek said.

'Desolation of Eden' is out Feb. 16, and the band will tour with the Red Chord on the Burgers and Bowling Tour.