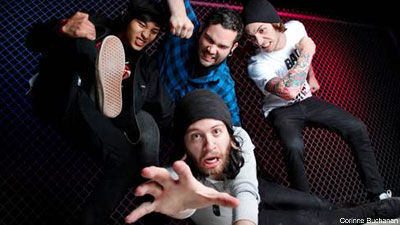 "It's taken so long to get it out, because we've been touring nonstop," MyChildren MyBride vocalist Matthew Hasting told Noisecreep about the band's forthcoming album, 'Lost Boy.' The band wanted to get the album done, but tour offers took them away from the task at hand, which was writing and recording.

"We were getting sick of our old songs and our old set list, so we made it happen," Hasting said. "We took off last November, December and January, wrote the record, went in the studio and did it in a month and a half. It's different because different people are writing it." Hasting said the band played four new songs on its tour with the Red Chord, and the new tunes went over well.

With different folks are writing the music now, there is a bit of a sonic difference, too. "Different people have different inspiration when it comes to writing," Hasting said. "The first record, 'Unbreakable,' combined metal and hardcore, but was not metalcore. It was real metal and real hardcore. With this record, we kept that in mind and did it better than the last album. The kids who became fans from the Mitchell Davis video or metalheads with longer hair than their girlfriend or hardcore bros that beat up everybody shows will be into it!"