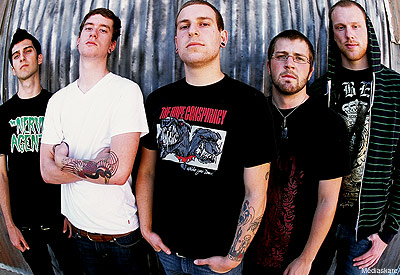 The Ghost Inside have a trio of guest vocalists on their new album, 'Returners,' but one of the songs and its accompanying guest throat allowed the band to explore entirely new territory. "We had three people do guest vocal parts on 'Returners,'" guitarist Aaron Brooks told Noisecreep. "Brendan from Betrayal sang on 'Between the Lines.' Mat Bruso, formerly of Bury Your Dead, sang on 'Chrono.' And Thom Green from Sleeping Giant sang on 'The Conflict.'

"We are incredibly happy with how all the parts came out. Brendan has been a close friend of ours for a while and we are all fans of Mat's vocals. I'm really stoked on our collaboration with Thom. Not only is he an amazing vocalist, his involvement with the track helped really deliver the message behind the song."

The message behind 'The Conflict' is a Christian one, which shouldn't shock Sleeping Giant die-hards! But it's a bit of a left turn for the Ghost Inside. "For anyone that isn't familiar with Sleeping Giant, they are every bit of the definition of a Christian band," Brooks said. "They stand behind their message to the fullest. We as a band have a lot of respect for them for that. The idea behind 'The Conflict' was to address the separation that exists between a lot of Christians and non-Christians in what is supposed to be a unified music scene. And how ridiculous it is that a separation exists in the first place!"

The lyrics of the song really address that particular schism. "The lyrics in the song go from representing people that patronize bands at shows for standing for their beliefs instead of hiding behind them, to people with a 'title' that live an openly hypocritical life," Brooks also said. "'The Conflict' [is] each side's inability to get past their differences to positively coexist. The rest of the lyrics are a message of encouragement for people to respect each other regardless of their background or outlook."

While the Ghost Inside do delve into the Christian mindset with the song, they are by no means categorized as a Christian band, especially in their own minds. "Most people in our band don't believe in any kind of God," Brooks theorized. "We just wanted to explain our thoughts on the subject, because we have a huge amount of respect for real Christian bands that are out there walking the walk. And we couldn't think of a better way to show that respect than to invite one of the most spiritually positive dudes that we know to speak his mind on our new record. Thanks Tommy!"

The Ghost Inside are currently touring with Stick to Your Guns.