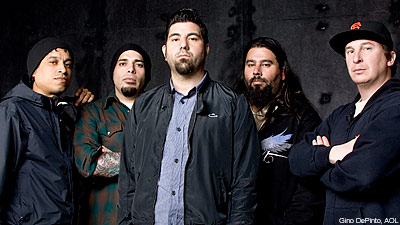 The Deftones -- Chino Moreno, Stephen Carpenter, Abe Cunningham, Frank Delgado and Sergio Vega -- are one of my all-time favorite bands, and 2000's 'White Pony' is my favorite album of the '00s. So when they entered our studios for a ''Creep Show' episode recently, I was thrilled that they were ready, willing and able to talk about everything going on with the band in the here and the now, as well as to reflect on how they got to the level they are currently at.

While it was a "chorizo party" of five dudes and one girl, it was a frank, open round table chat. With 22 years of bandhood in the rear view and many more in front of them, the 'Tones finish each other's sentences and literally act like a band of brothers. Their new album, 'Diamond Eyes,' is out now and if you've not yet heard it, you're doing yourself a disservice, as it's one of their most cohesive releases and can make lightning shoot out of your living room wall.


They updated us on bassist Chi Cheng's progress and encouraged fans to visit www.oneloveforchi.com for updates and ways to help Cheng with his recovery process, as he was injured in a car accident in November 2008, which left him in a minimally conscious state. The also talked about their knack for quiet-loud dynamics, the sonic tension -- perceived or otherwise -- between vocalist Moreno and guitarist Carpenter, as well as the shelved-but-not-forgotten album 'Eros,' which they were working on at the time of Cheng's accident. 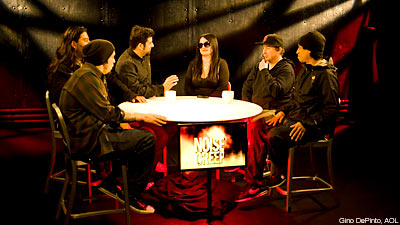 Moreno reveals that 'Diamond Eyes' was recorded in a month, whereas 2006's 'Saturday Night Wrist' was recorded over several years and at different places. The band discussed Meshuggah worship, touring plans and their upcoming trek on the BlackDiamondSkye Tour with Alice in Chains and Mastodon and how they've toured with everyone from Vega's Quicksand, Thursday, Snapcase to more radio-driven acts like Incubus and Godsmack, proving that the Deftones have universal appeal.They also engaged in a little East Coast vs. West Coast smack talk, but it was all love.

So sit back, relax and listen to Moreno and his mates offer their take on Deftones then and Deftones now. You will be riveted. 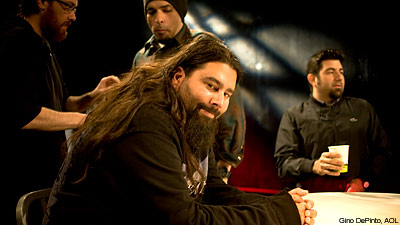 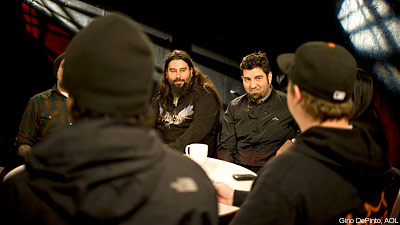