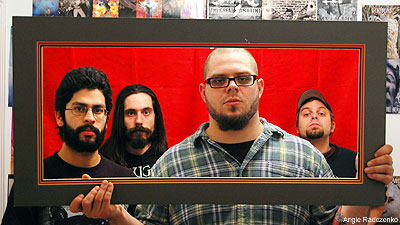 Canada's the Great Sabatini blend sludge and grindcore into an angry, blazing ball of rocking metal, with the roaring noise worship of Today Is the Day and Unsane. They claim influence from '70s bands like Black Sabbath, King Crimson and Captain Beyond.

Formed in 2007, the quartet have a distinct sound and vision. On the band's website, each member is a Sabatini. Drummer Steve Sabatini told Noisecreep the band's motive for their stage names. "It's about the mystique or the vibe we're trying to create with the band. Nothing too heavy. A brother-in-arms type of thing, too. I wish I had something crazy to add, but it was a simple thought and we stuck with it," he said.

The Sabatini's each share vocal duties. And, like their friends F--- the Facts, they have Canadian pride. "I wasn't born in Canada but this country has been great to me and my family so I can definitely say I'm proud to be a Canuck. I'm not about to wear a Habs jersey on stage or anything though," Steve said.

The drummer has learned a thing or two about crossing the Canadian border, as well. "We crossed with working visas so that definitely made things easier for us. If you go that route make sure all your information and paperwork is 100 percent. Booking a whole tour sucks but being turned away at the border sucks even worse," he said. He also suggested talking to other bands who have successfully toured back and forth.

But his best advice had to do with once you've crossed the line. "And if you don't have anywhere to sleep, Walmart parking lots are awesome."

The Great Sabatini self-released 'Sad Parade of Yesterdays' in late 2009 and can be found on their MySpace page. Be sure to check out guitarist Sean Sabatini's honest and funny road blog, Thinking Man's Idiot Online.