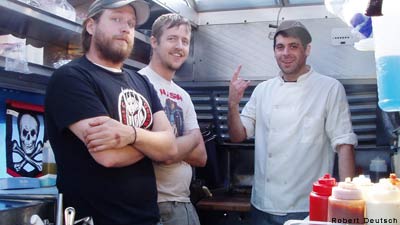 The Los Angeles-based, heavy metal-themed gourmet burger truck Grill 'Em All is coming to New York City this Saturday. Grill 'Em All are competing for the grand prize in an as-yet-untitled Food Network reality show that pits mobile food vendors against one another. The show will premiere on Aug. 15 and is aiming to grab the younger demographic. Seven trucks hit the gas in San Diego and have been driving east, grilling their asses off.

In each city, the cooks start their competition with nada in their trucks except random pantry items allowed by the producers. The truckers are left to their own devices to scare up meat, buns and other assorted condiments and ingredients. The truck that makes the least amount of revenue per challenge has to make the long, lonely loser's haul back to L.A. on its own. The winner's booty? A $50,000 cash prize and having their truck flat-bedded back to the West Coast.

"We are doing our basic menu," Grill 'Em All's Ryan Harkins told Noisecreep. "We have the Way Small Burger with beer-soaked onions, pepper jack cheese called The Blue Cheer. One of our buddies who got eliminated last round has an amazing truck -- Spencer on the Go -- and he is from San Francisco. He gave us a s--- ton of black truffles. I want to do a black truffle emulsion and am trying to get foie gras from a restaurant. We usually have a foie gras burger called The Lars, but this one? I am not sure what we'd call it, since I am trying to plan locations and menus while driving a big ass truck to New York City."

Harkins said the competition has been "beyond hard" and has suffered from bronchitis, strep throat, an ear infection and a vehicle that broke down 15 times on the way to Santa Fe, N.M. While his truck was considered the underdog when taping started, they are now eyeballs deep with a chance of winning the whole shebang, in true heavy metal fashion.

Grill 'Em All can't reveal where they will be in New York City, but savvy web-o-philes can resort to the 'net to find out when and where to find the truck.

In addition to being an accomplished chef, Harkins and his partner Matt Chernus are rabid metal fans who tried to raise capital for a restaurant and went the truck route instead. "We are music nerds," Ryan said. "We love heavy metal and we play CDs in our window with a sign that reads 'now slaying,' and people can listen when they order. We have stickers and stuff from labels, so we are a mobile marketing machine for labels to a foodie community. Metal and food are two of my favorite things. The only thing missing is a keg of beer!"

Municipal Waste drummer Dave Witte will also appear on the show and even has his own burger, dubbed simply The Witte Burger. It's name is deceptive, as the burger boasts cream cheese and deep-fried bacon. "We sell lthat one like crazy," Harkins said.

Go Grill 'Em All! Bring it home for metal.