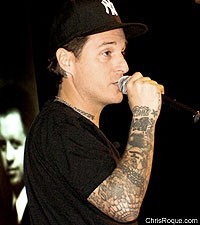 Toby Morse is a hardcore punk lifer. Ever since his early days in the Washington, D.C. hardcore scene, as a roadie for bands like Sick of It All and most famously as frontman for H2O, the East Coast-bred singer has been a staple of the underground punk circuit since the late '80s. Morse has traveled the globe with H2O, and five studio albums later, he shows no signs of slowing down.

Anyone familiar with H2O already knows how much the straight edge lifestyle means to Morse. Unlike many of his peers who have abandoned their straight edge convictions, Toby has stayed true to the clean living tenets that define that way of life. Bands like Gorilla Biscuits, 7 Seconds and Minor Threat helped inspire him, and now he's trying to do the same for others who might not know about hardcore or punk.

Recently, Morse started visiting junior high schools across the country as part of his One Life One Chance movement. Through his public speaking engagements, the hardcore vocalist informs students how possible it is to maintain a Positive Mental Attitude and still be cool, through a straight edge way of life.

In this Noisecreep exclusive, Morse talks to us about his new mission.

First off, how long have you been living a straight edge lifestyle, and are there ever moments where you struggled with temptation?

I've been living like this for 40 years. I've never actually struggled with it. I have been surrounded by sXe friends, and also people who partied like crazy, my entire life. Everyone I have been close to has had respect for each other's beliefs.

Is it frustrating when people you came up in the scene with lose their edge?

No, because that's their life and their choice to make. I don't judge anyone. If it's someone who preached a lot about the straight edge lifestyle, and was really militant about it, I think it's pretty funny when they break their edge. It's just my personal choice to live the way I live.

What gave you the idea to create One Life One Chance?

A friend of mine, who is an H2O fan and school teacher, used our song 'Sunday' as a memoir project. The kids were also given a PMA mix CD with a couple of other H2O songs on it, and the response from the students who never even heard hardcore/punk music was incredible because they related to the lyrics. I got over 40 letters in the mail from these kids, and it was an incredible feeling.

So one day, I went to the school and spoke to the students. I then did it at another school in Kingston, N.Y., and there were over to 900 kids there. I talked to them about being a dad, husband, and traveling musician, that has lived this fun-filled life without ever even trying drugs or alcohol. I spoke about keeping a positive and open mind. The feeling I got from talking to these kids was just like performing w H2O but better! So I spoke to other friends who are teachers, or work with kids, and starting putting together my first PowerPoint presentation about my life. In January and February of 2010, I went to do my first official appearances. I was so nervous, but the kids were so receptive!

The kids asked a lot of questions and seemed really interested in what I was talking about. Afterward, they all started asking for photos and autographs. They even asked me to put X's on their hands! It was surreal and felt powerful at the same time. Having a positive mental attitude goes a long way with any person that will listen and these kids really listened. I believe we all had a strong connection. The message is pure and easy; be yourself, follow your dreams, be inspired by music and art, but don't give into peer pressure -- life is too short.

Was it tough to explain your concept to the schools initially?

It wasn't hard at all. I have an OLOC outline that breaks down my message and presentation. The teachers and principals got the concept right away and appreciated what I was coming there to speak to kids about.

It's not every day that a heavily-tattooed singer of a hardcore band shows up to talk at junior high schools. How do the kids react to you when you first show up?

So many people have tattoos these days, so it's not as shocking anymore. There are also many musicians that kids love these days that are also heavily tatted, so I think that they could relate to me even more. I'm a person that's been surrounded by drugs my entire life, and I have never tried anything like that. The kids seem to be reacting to that.

Where else can you take One Life One Chance? What's in the future for the cause?

I'm tackling the school mission first. After that, who knows -- maybe a book about my life's journey? I take the OLOC motto around the world when I'm on tour with H2O anyway. The message is in our music. But getting the word out in schools is where I think it's really important right now. I'm a dad, so it's especially important to me. This OLOC movement can go into many different directions and places. There are so many different outlets and organizations that I can get my story out to. I'm excited the spread the positivity.