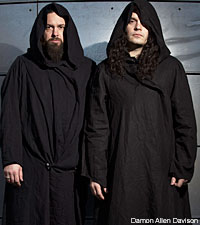 Long before he co-founded experimental noise act Sunn 0))) and their label Southern Lord, Greg Anderson was a fan of Metallica. But as the Bay Area band got more mainstream and Anderson's tastes got decidedly less so, he lost his interest in the multi-platinum quartet.

"Metallica at one point was an extremely important band to me," he tells Noisecreep. "I was a metalhead in 1984, and I got into Metallica, Motorhead, Slayer and Raven. 'Ride the Lightning' and 'Kill Em All' were very important and they still are some of my favorite records of all time, but after 'Master of Puppets,' it all went south for me. I started caring less and less with every record, and the last record I listened to was the Black album. At the time that it came out, I really enjoyed it, because it was like Metallica was playing some heavy ass rock, and I enjoyed it, and I thought it was cool that they were trying something different. But after that, I lost interest, and to be honest, after Master (of Puppets), it was still questionable. I don't care about them anymore, and I haven't for a long time."

Regardless, if James, Kirk, Lars and Rob can serve as a gateway band into heavy music for impressionable would-be metalheads, it's a win for everyone. "[Metallica are] going to turn on a whole new audience to heavy music, and that's great," Anderson says. "I'm always excited, no matter who the band is, Korn, Slipknot, whoever, if they're turning people on to heavy music, that could trickle down into getting into some cool shit, and that might mean some Southern Lord stuff, so of course I'm happy about that."

Sunn 0))) will be playing some West Coast dates in August in support of their latest album, 'Monoliths and Dimensions,' with new label-mates The Accused. Metallica's next leg of the Death Magnetic tour starts in October. Don't bet on seeing any band members at each other's shows.