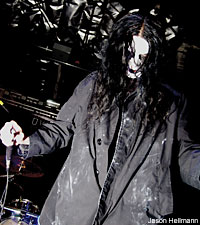 'Portal of Sorrow' is going to be the last undertaking to bear the Xasthur name. "The honorable thing to do is to end the band and not hang around too long, like so many metal/black metal bands do. Enough is enough, right?" The multi-instrumentalist Malefic stated on the release of the ninth full-length as his one-man band moniker. "I'm not able to make it work anymore. I don't want to turn into one of those bands who rely on too many guests and session musicians to make people interested in their music again."

'Portal of Sorrow' has been a heavily anticipated album even before anyone knew it was to be the last of the project. Back in February it was revealed that Malefic (born Scott Conner) was working with folk artist Marissa Nadler for the album. What the lo-fi blackening misery will sound like with Nadler's graceful voice is anyone's guess, but the one-time collaborator of Twilight, Nachtmystium and Sunn O))) is seeing the album as ending on a high note, expressing a disdain for his previous album, 'All Reflections Drained.'

"I couldn't finish up with an album that I was less than satisfied with. Now I suppose any or all goals have been reached and there is nothing more I wish to try with Xasthur, and it's time to move on ..."

This is a retirement from metal, as Malefic explains, "There's no use in trying to reinvent black metal or turn it upside down, it's all been done. And in the end, it's still metal and will remain within those circles, stereotypes and boundaries no matter what. Overall, I need a bigger change in my life, and with music than just trying to change metal. There isn't anything to lose."

With no hints or crumbs left lying around where things are headed sonically anything could be expected -- almost. It's safe to say the man who ends a farewell letter with "I would like to say f--- you to so many people it's not even funny" will not be putting smiles on too many faces with delightful melodies.

'Portal of Sorrow' has been released via Malefic's own label Disharmonic Variations, but his longtime home of Hydra Head is preparing to unveil the vinyl version very soon.