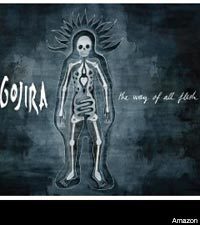 In heavy metal design, images of dragons, maidens and swords have been replaced with an enigmatic mixture of color, shape and mood that reflect the "glacially slow" and intricate heaviness in drone and avant-garde metal's rising popularity.

Ian Christe, author of 'Sound of the Beast: The Complete Headbanging History of Heavy Metal,' explains that though junior high schoolers and Norwegian design houses could both be drawing up skulls, pentagrams and band logos, "there are all levels of sophistication and intention -- and execution."

Christe points out the branding-image relationship that works out well for Sunn O))) -- the American drone metal band that attracts a highly varied audience at their live shows. Founding member and guitarist Stephen O'Malley is an art director who worked with bands like the Melvins and Boris in 1990s, and his dark, ambiguous and irreverently geometric designs for Sun O))) and Khanate are some of Christe's prime examples. "I would say it's a metal trait to not stop at the bounds of sensibility."

Converge's Jacob Bannon and Aaron Turner of Isis are both established visual artists who have popularized the return of DIY hand-drawn illustration, which O'Malley told Print is a good fit for underground metal. Christe believes that O'Malley, Turner and Seldon Hunt, a Brooklyn-based artist, "plot three key points on the map of avant-garde metal design...diversification is inherently part of the aesthetic."