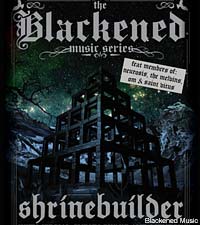 Boasting some of the underground metal scene's most notable newcomers, the series sets out to highlight "the most vibrant music scene in New York today," where "a handful of serious local bands are recreating black metal in New York's image." The mastermind behind the series, Adam Shore explains to Noisecreep, "It's really great to work with these artists, because I have an incredible amount of respect for them; I just think they're doing really important work, and I really want to be involved with [that]."