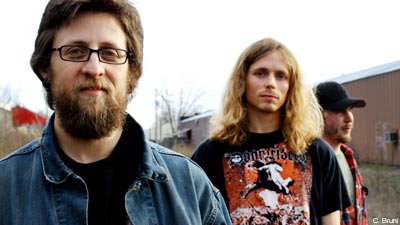 Something happened a few years ago, and though it's impossible to pin point the exact moment the shift is undeniable, metal -- especially doom -- is getting is enjoy a new large fan base with younger kids and indie rock fans that crave the unique orchestrated riffs. "We could have never guessed it would have gone this direction," Yob guitarist/vocalist Mike Scheidt told Noisecreep. "It's a good time to play music like this."

For Scheidt, he knows the exact moment the tides changed to heavy. "We played our first reunion shows, and [people at the club] said, 'Oh, this place is gonna sell out.' I thought, 'No way.' And we've played at that club a bunch of times to big crowds, but with classic bands like Weedeater and High on Fire, and I had seen it get really packed, but never sell out; or whatever that means," Scheidt recalls. "Sure enough [by 10 PM] they stopped letting people in and it was completely sold out. And that's when we realized things have changed. There were people we recognized from the old days. But then there were a bunch of people I did not know, but they knew us."

Since reforming after only a two-year break, Yob has seen a demand for their band they never thought possible, and Scheidt is taken back by it. "Metal is more respected than ever before. It's not that there ever hasn't been a healthy metal scene, because even in its worst era it was still trying and it was still diverse and worldwide with music trying to happen and progress. But now they're so many bands and so many kids," Scheidt exclaimed. "I worked at Guitar Center for a very short amount of time, and I was blown away by how many kids there are wearing Children of Bodom shirts or Dimmu Borgir shirts," Scheidt laughs. "When I was growing up, you would get beat up wearing that s---, and I did. It's a different world."

Scheidt is even seeing the interest in doom metal increase in his own home with his 14-year-old son wanting to know more -- and wanting to play more. "He's just now starting to catch on to things going to Pandora, going to a couple of other Web sites, listening to music, and listening to the Yob station and seeing what's connected to us," Scheidt smiled. "He'll ask me, 'Do you know [High on Fire's] Matt Pike?' I'm like, 'Yeah I do.' And he's like, 'Is he your friend?' And I'm like, 'Yeah ... he is. We don't hang out, but we have a good time when we're together.' It's tripping him out, because he's just catching up. But he's a kid getting hip to this style of music, that's a sophisticated vision."

With clusters of new fans coming over from other scenes, it rasies concerns about just what is the genuine article and what is the result of marketing. "I could be wrong," contemplates Scheidt. "But my perception is that there are bands that are packaged a little more that just skidder on the doom scene. Obvious example being the Sword or Wolfmother that are '70s-influenced bands for sure, but they're not Pentagram." Scheidt pauses. "But at the same time, Earth and Sunn O))) are getting these crazy draws, and they are 100 percent not handed to you on a silver platter."

There are some that worry bands might try and change their sound unnaturally to gain more of the new fans, but that's not much of a concern for Yob. "For us we still want to keep the music pure. Music has a life of its own, and the crowd chooses you. And we're never going to turn away a crowd that appreciates what we do," Scheidt says. "But we're also not trying to find that crowd either, because things start to get convoluted at that point."