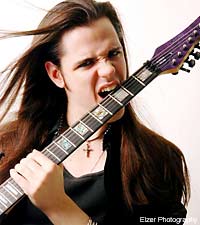 We recently posted our list of list of the top 10 guitarists of the shred era, and it caused quite a bit of controversy. The article was picked up by various other music outlets and readers everywhere chimed in with their opinions. For the most part people seemed to be comfortable with our choices but our omission of players like Steve Vai and Joe Satriani really ticked some readers off. We decided to ask Shred Sean, one of the best and younger shred guitarists around today, what he thought about the older and current age of the art form.

Some of you might be familiar with Sean from Blessed by a Broken Heart. His searing guitar work with the group brings to mind many of the guys we mentioned in our list. And as you'll read below, he was completely influenced by them. He is currently playing festivals with the band and demoing new material now that they've split from Century Media Records. Sean is also working on a solo album which he promises will be packed wall to wall with fretboard pyrotechnics. Noisecreep caught up with Sean right before he left for a Blessed by a Broken Heart festival appearance in Japan.

You came of age during the 1990s, so how did you first become aware of the 'classic era' shred players like Jason Becker and Tony MacAlpine?

I started playing guitar in 1998 and being a kid of the '90s, I was surrounded in school by guys who liked Dave Matthews and rap music. A friend of mine turned me on to Metallica, and I thought that was the fastest s--- ever. I dug the solos, but then when I started taking lessons my guitar teacher said, "You think that's fast? You think that rips? Well then take a listen to these guys!" He wrote down three albums on my practice notepad, as follows: Dokken's 'Back for the Attack,' Yngwie J. Malmsteen's 'Rising Force,' and 'Van Halen I.' I went and bought all of those CDs and wore them out. It was all over. From then on, I searched out every '80s and '90s band that had a sick guitarist -- the shred fever was upon me.

Did you gravitate more towards the Shrapnel Records artists than the thrash and speed metal guys from that specific era?

I definitely went more towards the Shrapnel guys. I remember hearing Racer X's 'Live Extreme Volume 2' and just losing it. It was so fast and over the top that it was nuts! I locked myself away in the basement and battled Paul Gilbert's 'Intense Rock' videos for at least a year. I also liked some of the thrash stuff, too, like Pantera and Testament. As long as it had a guy who could burn, I was all about it.

One of the most common criticisms of the late 1980s was that guitarists got too caught up with the speed aspect of the playing, and the songwriting got put on the back burner. How do you feel about that assessment?

I think there are a few guilty of this crime, but on the whole the late '80s early '90s had some of the most talented players emerge from it, many on them on the top of your shred era list and some not. Here's a few of the best late '80s early '90s fret melters, all of which had great sense of melody and weren't just fret wankers:

Also as a side note, I'd like to include a smaller list of newer emerging shredders who deserve some recognition for their recent efforts to keep the shred alive:

The shred scene has guys like Michael Angelo Batio and Paul Gilbert who have been known to throw in theatrical tricks into their live solos. What are your thoughts on this side of performing and would you be open to doing stuff like playing with a 4 necked guitar or a power drill?

People aren't just coming to hear you play. They are there to see a show. KISS understood that and they were one of the biggest rock bands ever. I think it all ties into the whole package and it definitely matters. The power drill thing was cool but you just have to make sure not to get it caught in the locks! (Paul Gilbert did that once.)

Noisecreep recently posted its list of top 10 guitarists of the shred era, and a lot of people complained that Steve Vai and Joe Satriani should have been included. Would you consider them shred guys?

Steve Vai -- yes, especially in his earlier years. His work with the David Lee Roth solo band in the 'Eat 'Em and Smile' era (and check out the movie 'Crossroads,' and not the one with Britney Spears!) is stunning. Joe Satriani -- I'm not so sure. He's more of a blues-rock guy to me, albeit, with an impeccable sense of melody. I would put him more on a list of great influential rock guitar players, with cats like Eddie Van Halen, Jimmy Page, Stevie Ray Vaughn and Jimi Hendrix. So [everyone] outraged by Satch not making the cut for top 10 shredders should just understand in the grand scheme of things that he really doesn't fit the category. I think he's always leaned more towards the blues and melodic rock side of things.

That's so hard! How about my top 30 shredders along with my suggested album for each?

24) Alex Skolnick -- w/ Testament: 'The New Order' and 'Practice What You Preach'