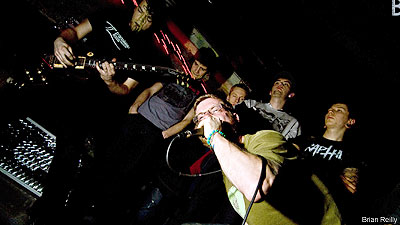 Philadelphia quartet Rosetta have revealed their brand new song, 'Revolve,' from their forthcoming, seven-song album, 'A Determinism of Morality,' which is due out via Translation Loss on May 25. The first two minutes are instrumental, steadily building to a slow metallic and paralyzing boil! Turns out, the richly textured, 'heavy in a not so bash you over the head obvious' song was a bit of a happy accident.

"'Revolve' was one of the later songs to be written for the album, and really only came together at the last second," Rosetta guitarist Matt Weed told Noisecreep. "It was as much a surprise to us as I'm sure it will be to others. It has a more hopeful tone than we're known for, but at the same time there are moments where it's heavy or even downright grim."

The song's mood, as well as its plateaus, are indicative of the larger scope, which is the album itself. Weed continued, "That's been the semi-subconscious paradigm throughout this album's formation: to make music that's more varied in its structure and mood,while at the same time, trying to be more honest about its fragmented origins."

Rosetta will be touring the U.S. heavily in support of the 'A Determinism of Morality.'

7. 'A Determinism of Morality'