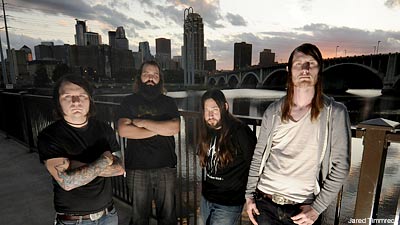 Translation Loss Records is one of the best boutique metal labels in today's scene, focusing on quality over quantity with its releases. So it makes sense that the label developed a tour to spotlight its brand. "Creating a Translation Loss Records Tour package was an idea that Battlefields brought to the table a while back," Battlefields' vocalist Rusty Steele told Noisecreep. "Initially, the idea was to put Giant Squid, Rosetta and Battlefields together in the Midwest and West Coast."

"We soon found out that a lot of the TL bands correspond with one another, making it a communicative family of sorts -- at least from my stand point of booking." The communal, fraternal nature of the small, but tight knit Translation Loss roster made for an easily craftable tour.

Steele said, "Essentially you can create a solid touring package with any of the TL bands, no matter whose name is pulled out of the hat and able. We are always in cahoots with Rosetta, and they have become one of our best friend bands around the country. We are always encouraging those dudes to tour more, but ends up that they need to stay in the northeastern part of the States. City of Ships and Rosetta have been playing together quite a bit over the past year, so it made sense to create a package of solid friends, to say the very least, and use that as the focus point for the first TL tour."

The mini-tour runs through the East Coast, starting in Philadelphia on Jan. 15.