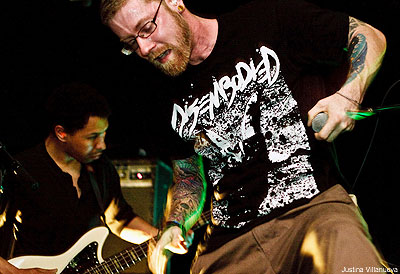 Rosetta's show at Brooklyn, N.Y.'s Public Assembly on March 28 was never advertised as a new album listening party. Yet, just before the band began their set guitarist J. Matthew Weed told the crowd, "Our next album is coming out May 25."

"Whoa. Wait. Do I not read Blabbermouth enough?" this Noisecreep writer thought to herself. I was not expecting a completely new Rosetta set.

A clever person in the crowd immediately asked if the release had song titles yet. Weed answered, "Yes, but we're not going to tell you them." Rather than dive into a list of song names -- which presumably would have been way boring -- the post-metallers told us they would only be playing the new material.

After frontman Michael Armine joked that he would leak the album to people who e-mailed the band, Rosetta delivered one of the best sets I've seen from them yet. The Philadephia-bred musicians take spacey Neurosis, Isis ambience and make it meaner, so it is more fit for a basement show.

'A Determinism Of Morality' will be released May 25 through Translation Loss. But the band also just released a vinyl split with East of the Wall and Year of No Light.

Download Rosetta Songs
Filed Under: east of the wall, EastOfTheWall, Rosetta, year of no light, YearOfNoLight
Categories: News
Comments
Leave A Comment
Back To Top