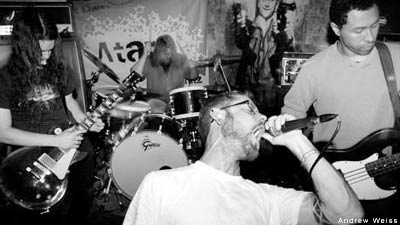 Rosetta have been locked away in the studio with Andrew Schneider since the first weekend in November, and bassist Dave Grossman recently told Noisecreep that "the experience has been amazing thus far. Working with Andrew has made us a better band. He's really got a great ear and pushes people to get the best performance possible. He's worked with so many great bands and done so many awesome recordings. I feel like everyone says this, but I really believe this is the best thing we've ever done. This was the most prepared we've ever gone into a recording session, and I think everything sounds more focused as a result." Sounds like things are going swimmingly for Rosetta this fall.

Grossman revealed that the album, due out in 2010 via Translation Loss, should have seven tunes and clock in at 48 minutes, as well. Through it all, the band hasn't dealt with nonsense or terrifying technical issues that often arise during the recording process.

"The drama has been kept to a minimum thus far," Grossman said. "Andrew had some computer issues, which has slowed us down a little bit and put us behind schedule on mixing. Everything should still be done before the end of the year. Besides that, the most drama that has happened was a discussion between Andrew, Brendan Tobin from Made Out of Babies, Matt and myself over what the creepiest, most unsettling piece of music we've ever heard was. I forget who ended up getting the award.

"I wish I had a great studio story to tell you," Grossman continued. "But we're pretty boring guys. We mostly tell a bunch of really crappy inside jokes. Maggie Gyllenhaal lives up the street from the studio, and I saw her walking by a few times. There is one awesome story about a certain member of this band, a fake British accent and a coffee shop employee, but I'll get in trouble for telling that one here."

Download Rosetta Songs
Filed Under: Made Out of Babies, MadeOutOfBabies, Rosetta
Categories: Interviews
Comments
Leave A Comment
Back To Top