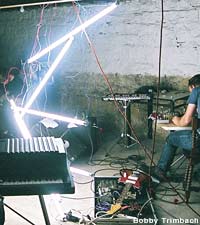 The guitars hum and soar, but there are no riffs. There are melodies, but they are deep. A listener may have to dig to find one to follow to the end of the song, but when it's found, it's cherished. There are no vocals or drums to clutter the mountains of sound the amps and twisted knobs have created. That is the landscape of Dayton, Ohio's Romance of Young Tigers, a band that is no more.

In the very short time Romance of Young Tigers played, people took notice. Folks from all musical walks of life were becoming admitted fans. It would be understandable to consider them a noise band -- or even a band of amp masturbation in the colony of bands like Sunn O))) or Nadja -- but Romance of Young Tigers had their own sound. The band became very well-noted for the illustrious packaging of their albums. Even the demo they sent to Magic Bullet Records, who did sign them, was a decked-out package of hand-crafted love. Though Romance of Young Tigers just broke up, their roar is going to be felt for a while. They're the type of band that inspired other bands to explore new musical worlds.

We caught up with founding member Seth Graham and got the lowdown on why the band broke up and on the upcoming records still scheduled to come out.

Many have tried to firmly categorize Romance of Young Tigers. Some called the band a noise band while others say post-rock. How did you define and describe the band?

I think at first with '(I Have Supped Full On) Horrors,' when we started the band it was a combination of the two. The making of that record between Todd [Osborn], Jeremiah [Stikeleather] and I were very deliberate in that we wanted: harmony, structure and noise. I wanted the texture to blend more in that record, but it didn't seem to work out as well as I hoped. We still really liked the record, but I felt it was a trial and error album.

With 'Marie,' I felt we succeeded in deriving texture in our music with new members. Todd and I started playing with Gabe [Mitchell] and Aaron [Smith], and we naturally, with no big intentions, worked out 'Marie.' When it was finished, it was a surprise to us of how good it turned out. That record I think is just us, what we set out to do.

When someone says 'noise,' I'm not sure what is meant by it. I would say we are making music -- it's atmospheric, it's noisy, it's quiet, it's structured with some room for improvisation depending on the song. I guess to answer the question, for 'Marie,' it's not noise or post rock, it is just music that has all kinds of elements. It is pretty, psychedelic, and many other things.

Was it always a point in starting the band that you guys did not want a drummer?

When Todd and I started playing music together, we just were going to keep it between the two of us. However, Jeremiah showed desire to play with us, and we played with him and things worked out. We did try out some drummers at that point, but nothing seemed to work. I liked the idea of having no drummer, so after a few failed tryouts we just decided not to have a drummer.

Did the band have a hard time finding a fan base in your hometown of Dayton, Ohio?

I think Dayton (especially Dayton, because its so small) and most small or big cities are similar when it comes to music or art. You have to cater to a group or groups of people, if you don't; it's an uphill battle. I feel like, after a long period, we trekked up that hill.

I think in addition to this, if you don't cater to other bands in ways they want, people will find reasons to dislike your band, and it has nothing to do with being objective, listening to the music and deciding if it's for you or not. It has much more to do with stigma, aesthetics, and personal gain.

Consequently, we as a band do not really 'hang out' with all the 'right' people or say insincere things to other bands to create friends to get an advantage in town -- e.g. fan base. And if you don't do those things, the basics of getting shows can be difficult. I felt we really invested in the quality of what we did. So we had many battles, but we, at the same time, didn't really take these realities too seriously. We enjoyed playing music, and we got very lucky with getting good shows in and out of town.

The local weirdness existed, but it didn't bother us too much. We never had a huge following in town, we did have decent shows, but we were definitely not 'the' band to play with in town. But I liked that, we felt more free to do whatever because of it.

Looking back what were your proudest moments in Romance of Young Tigers?

For me there are so many. Creating 'Marie' is one of my proudest moments. I love that record, it's really good, and I know I will feel that way years from now, which is a good feeling. Our show at the Cincinnati Contemporary Arts Museum was one of the most memorable shows for me, along with our show in Montreal. The drummer from [Godspeed You! Black Emperor] was watching us and said, 'play more' at a break in our set, that was surreal.

Despite a lot of personal challenges with things locally, we still managed to do OK. We did what we wanted, and I think overtime people really respected that, even if they didn't like what we were doing. As a band, we got along so well, we had almost no drama, very little conflict, touring with them is some of the best times I've had. I'm so proud we got along so well, and our breakup was not anything personal, and there is no strife, which is something to [be] proud of I think.

The packaging for 'Marie' was astonishingly beautiful, and was mentioned in numerous reviews for the hand-crafted artwork. How did the idea for the vinyl and CD packaging come about?

The packaging for 'Marie' was a collaboration between me and my friend Bobby Trimbach. The two faces on the cover I drew when I was a teenager. We used that as a beginning and built from that. Bobby had some amazing ideas. After trying things, we came up with what you see.

I'm slightly embarrassed to explain this, but I will. The explanation of the faces is, I drew those imagining meeting someone I actually liked. I grew up in a conservative home, and was home schooled. So I hated most people I met. I made this ideal person in my head and drew the picture (it's a self portrait and an imaginary person). So the record was for my wife, so I thought it would be appropriate to use that piece of art. The record is so layered, ambiguous and about texture. Bobby and I came up with the presentation to represent the record as so. It was four screens of images, and a screen for the gold texture. We printed the record covers and the CD packaging. The LP covers took over 40 hours to do.

Romance of Young Tigers has disbanded, what happened?

The main reason is Gabe and I are moving. Gabe is moving to Athens and I'm moving to Brooklyn. We were going to keep on going as a long distance band. We even had a European tour worked out. But I think it was just time to be done and move on. I wanted to do new things, and the work was becoming overwhelming with tour etc.

I wanted to start trying new ideas with new friends in [New York]. Nothing bad happened; it was a friendly split. It was sad to break up because we had to cancel the European tour and to give up so much we invested in, which was hard. But I think the band has run its course for now.

I know there are still some releases on the way, a live CD-R and split with Pyramids. Are those still happening?

Yes, both are happening. The live CD-R will be out very soon on Allergic to Fun. I'm not supposed to say much about the split via instruction from Pyramids. But the collaboration is coming out after their full-length is out. I assume this year sometime.

Also, Gabe and I are working on a soundtrack for a short film called 'boys will be boys' that will come out as well.

How did the Pyramids split come about?

This was weird and amazing. I was really into that band when their first record came out. I told many friends about it. I got my entire band into them. For months we just talked about how good they were. Then we got an email out of nowhere from them. I couldn't believe it. I had to double check to make sure it was really them.

They said they liked our band and were doing a collaboration with 10 bands they liked, and we were one of them. I was beyond flattered so we did that. Since then, they are taking a while to finish their own full length, which they expanded from 10 bands to like 30 bands or something, many good notable bands on the split. We are really happy to be on it.

Do you have any plans to create music in New York?

Yes, I plan to play music with my friend Eric and possibly with my friend Bob [Mallory, of Sparrows Swarm and Sing], and who knows who else. I plan to work on a lot of music up there, possibly even stuff on my own. Very excited to do new things.

Todd might move up there eventually, if he does we will probably play music again. I know Gabe is working on new things and so is Aaron.