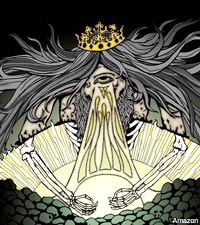 Raise the Red Lantern's first eponymous release, on At a Loss Recordings, is more tamely-titled than past offerings -- unlike titles such as 'Thunderf---' and 'Breathe Fire.'

Adding to the subtlety is the lack of band name and album title on the cover art, which was done by designer/artist Rick Leech. But what the cover lacks in identification it makes up for in weirdness: a crowned, hairy being with (vaguely) one eye and skeletal arms descend upon a pile of skulls at sunset.

Chicago-based Leech has done work for bands such as Disfear, Brutal Truth, and Indian -- mostly show flyers. His illustrative style is reminiscent of the crudity of old-school tattoo artwork, with its simple, thick lines and faded color palletes. Some of them are even in black and white. While this can sometimes be seen as an artistic liability, Leech turns it into an asset.

Raise the Red Lantern just wrapped up a tour with Utah's God's Revolver.