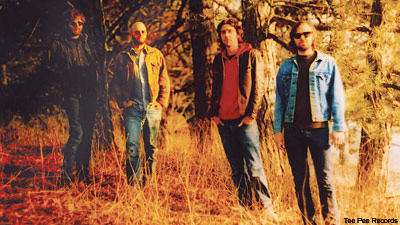 You sell merch, you hope for some cash from the door, and maybe get some gambling going on. These are the assumed ways to pay for life on the road; except bands in Canada have another option: government funding with the Cultural Sector Grant (more known as Promart) that aids bands that leave the great north crossing boarders. "The whole logic behind it is promoting Canadian culture abroad. That's what they're setting out to do," Andrew Gunn of the Toronto outfit Quest For Fire told Noisecreep.

Gunn was blessed one time with the glory and comfort of the Promart grant, when he was in his former band, the Deadly Snakes. "We were given something ridiculous like $14,000 for 5 weeks in the States," Gunn laughed. "Which was amazing, because we could get hotel rooms and eat food everyday." Andrew shined talking about the comfort of that tour.

When asked if Quest For Fire could get this government funding Gunn replied, "Seems, at least in my experience, that there is not a great chance in the world, unless you've done it a bunch of times -- and you're an established act -- it's pretty hard to get it right off the bat. But when you do it's amazing. It's the greatest thing in the world."

Unfortunately the program has lost most of it's funding -- $4.7 million to get down to the grit of it -- after a hefty year or so in political scrutiny. "We have a real right wing prime minister right now, and he's very anti-artist funding," Gunn remarked.

But this of course isn't stopping Gunn from trying to get some support. "There is no reason not to go after it and not do all the applications. It's a headache of paperwork, but in the end you could come home to a check and be able to pay rent and not be totally broke after tour." However, Andrew is keeping realistic to the state of touring these days. "I'm not banking on it, but we'll try. Why not."

Quest For Fire will be making another journey down to the states soon to join up with fellow brethren in the army of psychedelia NAAM for a CMJ showcase at Union Pool in NYC.