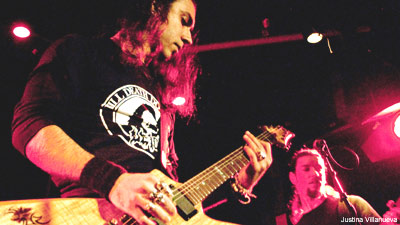 For six years now, Vice Magazine has consistently updated the world with the whereabouts of Iraqi heavy metal sensation Acrassicauda. After being able to make the move to the States, it was just as appropriate for Vice to support the band's first live U.S. performance on Jan. 21 at The Charleston in Brooklyn, N.Y. Just two weeks later and a couple blocks away at Public Assembly, Vice and Chronic Youth were able to do it all over again, but this time, for the public, not just for friends and family.

His stern attitude woke the crowd up. With a blizzard establishing itself outside, the word 'warm' was as pleasurable a sound as watching the tall, passionate metallers living out their dream on a real stage. Around 2006, as violence escalated in Baghdad, the band members fled to Syria and then Turkey. After having their equipment destroyed and then later having to sell their gear to afford to move around, Acrassicauda's members proved their drive to do something most Americans take for granted -- which is to openly be a part of the metal scene.

At the venue, lead guitarist Tony Aziz showcased his thrashy riffs and even played a solo with his knees on the ground. Talal got the audience in on a full "Yeah!" chant. Drummer Marwan Riyadh took a cigarette break while everyone tuned their stringed instruments in between songs. From the looks of it, they were at peace and content playing their songs.

Acrassicauda's journey is now available in book format. Published by MTV, the book is called 'Heavy Metal in Baghdad: The Story of Acrassicauda.' 'Only the Dead See the End of the War' will be out on Vice Records in March, and the single, 'Garden of Stone,' is streaming on Vice's Web site.You can catch them live at Scion Rock Fest in Columbus, Ohio on March 13.