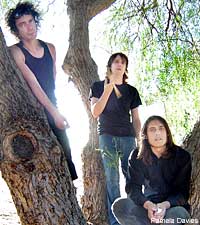 As Nebula continue on their European tour in support of their latest stunner 'Heavy Psych,' the band has announced an upcoming split seven-inch with their Tee Pee Records labelmates Quest for Fire and a slew of U.S. tour dates starting with SXSW.

Showcasing a brand new track called 'The Perfect Rapture,' bassist Tom Davies tells Noisecreep, "The split seven-inch was actually [frontman Eddie Glass'] idea. We are touring with fellow labelmates Quest For Fire in the spring and thought it would be cool to put out a split seven-inch for the tour."

'The Perfect Rapture' is Nebula's first offering since their critically-acclaimed, 2009 release, 'Heavy Psych,' an album about which Davies admits, "We worked hard on and were pleased with the results."

With the album marking the band's return to Tee Pee Records for the first time in over a decade, Davies continues, "Tee Pee has done a great job getting it out there to the masses, and people are stoked. We have a new fan base and it's also re-ignited interest from people that may have forgotten about us. So it's been great."

As for the band's current European tour and their upcoming U.S. tour, Davies says, "We're excited. It's our first outing with new drummer Jimmy Sweet [ex-Hot Hot Heat], and it's great to go back and play some great shows and see some old friends."

The seven-inch split with Quest For Fire is out March 23 and limited to 1,000 pressings on colored vinyl. Artwork was done by the Deadly Snakes' Andre Ethier.