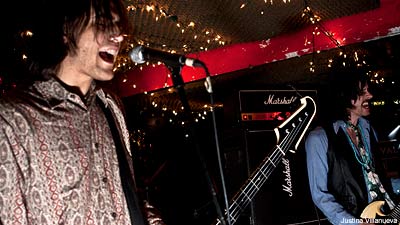 "I'm singing through the wind here" vocalist Kenny Kreisor said about the cloud of feedback on stage. His solution? "I'm going to just do more guitar solos then."

Naam played second on the Tee Pee Records CMJ showcase. Despite Naam taking over the N.Y.C. live show scene, I missed their performance. But, I'll have many other chances, since they really are taking over. When I reentered the venue, psychedelic veteran rockers Nebula were diving into their set.

"Thank you to all of you that came out, even though the show was free," Nebula bassist Tom Davies said.

Drummer Adam Kriney, who Davies called a real "Brooklyn vegan" in between songs, is the newest member of the band. He was recruited just this August but you would have thought he's been with the band since the original 1997 lineup.

With lyrics like "freedom is the key," it's possible that Nebula took a trip to 1969 just before arriving to the lower east side. "She's so heavy. And we don't mean fat," frontman Eddie Glass (ex-Fu Manchu) said after they played a medley of songs.

While the sun burned bright outside, the dark basement was filled with true nostalgic rock 'n' roll lovers. Hailing from Montreal, Priestess -- who was just added to the Tee Pee Records roster -- closed up the showcase with some more trippy hard rock.