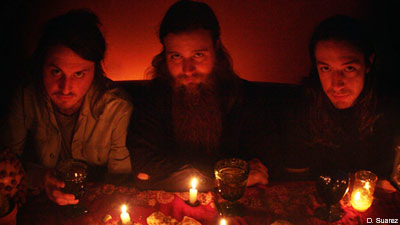 In the short time Naam have been a band, people have been looking their way. They've made a thunderous mark that can't be denied. The live shows of Naam have been the flagship of conversations and mummers on the band. Vocalist/bassist John Bundy described the live presentation of the band to Noisecreep as "an overwhelming wall of sound." But this is only one part of Naam, in the studio it's less about the loud and more about capturing a psychedelic journey in a capsule. "It's a psych record," Bundy says of the band's debut album. "There are some heavy parts, but your first thought wouldn't be this is a metal record."

The members of Naam have been worried that fans that know them for their punishing live show will end up lost on the mult-layered record. "We really didn't know how people would react to the record as to how the production is and everything," Bundy confessed. "We crammed everything we wanted in a record."

But so far, the band has been getting adorned with great reviews. And if fans can't swallow the album, Bundy thinks it has to do with how the standards for recordings have sunk into a consuming pit of lo-fi. "Right now, you have a lot of what I like to call s--- wave, all this under produced horrible bed room recordings of talentless people," Bundy exclaimed. "It really bums me out. We just wanted to make a solid well-produced record."

The concept of having a live version and a studio version of the band comes from the member's own disgust of band covering their own records. "When you go see a band live, you don't want to be listening to the record," Bundy explained. "I want something different. The dynamic between a live show and a record is a really big deal for me. Even if you go see your favorite band and it's just like listening to the record then what's the point, just go home and listen to the record."

Bundy's favorite records to listen to express the lush complexity of progressive rock. "I've always loved prog," Bundy let out in excitement. "But prog has always been a really nerdy thing for me. My problem with prog is it doesn't have balls. The volumes not there and the intensity is not there."

It's in the intensity that Naam was born. The studio came later, so it all comes back to shatter and crash of band on stage. "We really wanted to some heavy psych stuff that really didn't exist at the time," Bundy recalled of the thought that formed the band. "There were a handful of bands that were doing stuff that we liked. We just wanted to expand on it and make it heavier. Heavy grooves were pretty much the motivation behind Naam."