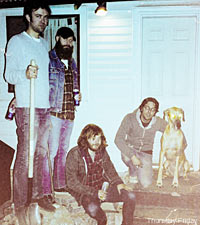 Toronto-based psych rockers Quest for Fire will unleash their sophomore album, 'Lights From Paradise,' on Aug. 31 on Tee Pee Records, in what is sure to be a fuzzed out way to end the summer. The band specializes in primitive thud and psychadelia, which certainly bends your brain. But the band comes from incredibly diverse backgrounds that might make you wonder how the hell they got here.

"Andrew and I used to be in a garage rock band called the Deadly Snakes," frontman Chad Ross, who also has a psych/folk/rock project dubbed Nordic Nomadic, told Noisecreep. "Mike used to be in a hardcore/metal band called Cursed. Mike and I were also in the recent touring band for Steve McBean's the Pink Mountaintops. We like to jam for way too long."

Ross admitted that 'Lights From Paradise' was "super fun to write and record. We spent a long timed holed up in our jam space and studio with a lovely potpourri of scents, refreshing beverages, comedy gold, moody lighting and exceptionally good vibes. Nothing too scary." No wonder their creativity was fostered with all those special ingredients, especially the comedy gold and potpourri of scents!

There isn't much of a psych rock scene setting people's hair ablaze in Toronto, but Quest for Fire are a bit of an anomaly -- an assessment Ross said might trouble some of the local scene dinosaurs. However, none of this troubles them in the slightest. There's an odd, unique little music community festering up north. "We have common bros like Deloro, the Rickwhitealbum, Wyrd, Visions, Andre Ethier, $100 and Anagram, just to name a few," Ross said. "So yeah, there is a freaky good little scene here."

Download Quest For Fire Songs
Filed Under: Quest for Fire, QuestForFire
Categories: Interviews
Comments
Leave A Comment
Back To Top